It is not an easy thing to pack up 2 people’s lives into 7 suitcases… That’s what James and I had to do when we made the decision in May 2016 to pack up our lives in Johannesburg and start a new one in LA. Trust me, it’s easier said than done.

James and I have been married for 14 years and for all of that time we’ve lived in 2 bedroom townhouses. So I mean really, how much stuff could we possibly have??

Turns out a lot…a whole lot…a (insert any expletive you want to) lot!

From the day we decided to make the move we had 4 months before we got on the plane. Thankfully the producer in me knew that that was not a lot of time to pack up a life and start planning a new one on the other side, whilst still working and handling normal life stuff like cars that break down, the death of a close friend, hospitals, being mugged (normal for SA that is) etc. in between. And even though we packed for what felt like 4 months non-stop, it was a mad scramble right up until we had to leave for the airport.

We had to get rid of every teaspoon, stapler, towel and shovel we ever owned. I guess I could have just loaded everything onto a truck and dumped it at a charity shop, but that is also very hard to do.

It is tough to get rid of that vase we got as a wedding gift and those book stands we bought in Prague and that blanket that my grandma knit for me. What do you do with the DVD’s of all the movies we’ve made and been in, the first trophee I won for a drama competition, jewelry, the mugs we bought to write each other silly messages on?

You can’t just ‘get rid’ of everything… your life. Especially when you are as ridiculously sentimental as I am. (I still have/had boxes full of notes that school friends wrote me!)

Fortunately, James and I have been talking about and reading a lot about simplifying and ‘minimalizing’ our lives on all levels (materialistic, digitally, emotionally etc.) for quite some time before we decided to make the big move. We found these guys online that call themselves ‘The Minimalists’ and started talking and thinking about their principles of ‘having less so that you can have more’.

We tried our best to responsibly ‘get rid of’ or ‘re-distribute’ our things. Giving things to friends and family that we knew they needed or wanted or would use. Emotionally it helped to know that the carpet James and I bought on honeymoon is now at a friend’s house and that my favourite vase is on my sister’s mantle piece and that the girls from my charity, ‘A Girl like Alice’, will get to wear all the evening gowns I had to leave behind.

Basically, we made our house into a shop and had everybody we know walk through and pick and choose whatever they wanted. People left with cars and trailers full of stuff. This went on for weeks. And still we had sooo much stuff!

Then a friend came with her big Toyota and loaded up another car load of stuff to take to charity. Other friends sent an Aramex truck to pick up all the movie memorabilia we had - to be auctioned off for Missing Children SA and to drop off all our books and music at The Klein Karoo Reading Centre. Another truck came to pick up a garage full of stuff that went to Limpopo to our domestic worker’s house.

And still there was more stuff!

We were forced to store a bunch of things at our families’ houses to be sorted through at some later stage and then we ended up leaving yet another crate full of ‘stuff’ in the friend’s car that took us to the airport!

Moral of the story: 10 months later and I haven’t really missed any of my ‘stuff’. I miss people, not things. You don’t need 17 flavours of shower gel or 10 vases of which you only use 1. You don’t need 7 blankets and 5 old towels, 2 is fine. And that skirt that has been hanging in your cupboard for 10 years, somebody else could actually be wearing it.

Here’s the challenge: Get rid of something materialistic, digital (sort out your desktop!) and emotional (an unhealthy relationship or negative thoughts for example) in your life this week. You won’t be giving up anything, you’ll be gaining so much more.

PS: After 8 months (almost to the day!), the few crates and pieces of furniture we shipped over from SA arrived in LA. I would be a complete hypocrite if I didn’t note that I cried a bit when I unpacked the bookshelf my dad and James made and my Le Creuset pots!

Check back soon
Once posts are published, you’ll see them here.

Generosity is Contagious - How to Help in the Time of Corona: 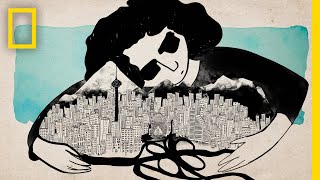